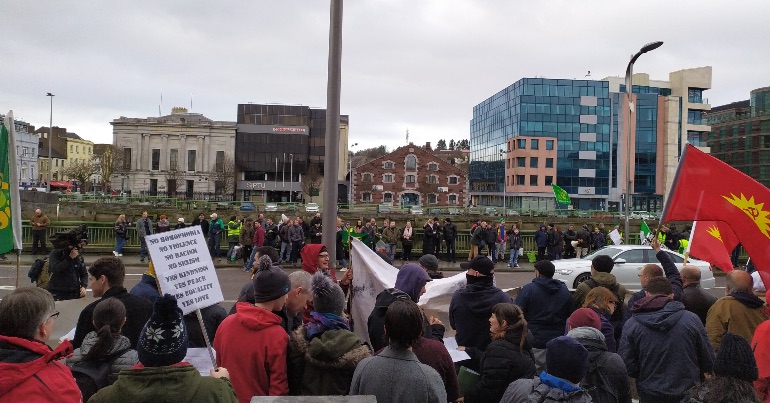 Only nationalists and patriots are willing to stand up for free speech in Ireland. This is the argument we see trotted out time and again by the so-called defenders of free speech. To them, the notion of any limit on free speech is unthinkable. Regardless of the consequences, they must be allowed to say what they want.

And what they want to invariably do is attack minorities and anyone they consider a part of mainstream politics and the left. They partly defend this position by claiming that NGOs and left-wing activists are in league with the government in its attempts to amend Ireland’s legislation around hate speech. But this is only one element of a larger conspiracy theory.

The broader picture involves NGOs and activists in favour of amending the legislation being financed by Jewish philanthropist George Soros and the government itself. The end goal is to make it illegal to criticise the government and its policy of what’s referred to as “plantations”. This sounds ludicrous, and rightly so. Nonetheless, there are many who fully believe in the theory or variants thereof.

Some of them made an appearance in Cork on Saturday 4 January during what was called a “Free Speech Rally” which attracted roughly 45 protestors. In a video posted by one attendee afterwards, fellow rally-goers can be heard discussing the “infiltration” of universities and the Catholic church in Ireland by “Cultural Marxists”. This particular conspiracy theory — which is also anti-Semitic — is merely supplementary to the aforementioned theory about Soros and NGOs. What it all boils down to, at least according to true believers, is a plan by elites to end freedom of speech and create a fascist one-world government. So, it was unsurprising that this is what we saw in Cork over the weekend.

It was also unsurprising to see the involvement of well-known figures of the Irish far right. Representatives of the National Party and Identity Ireland were present. Also present were individual far right extremists known for their harassment of left-wing activists and women. This should put paid to the excuse trotted out again and again that those attending the so-called free speech protests around the country are in any way concerned about democracy and free speech.

Some people attending these rallies probably are misinformed and, as a result, worried about changes to the legislation regarding free speech. But most aren’t. As we’ve said more than once here at The Beacon, these people don’t care about freedom of speech. What they care about is their ability to attack others they simply think of as lessers.

Evidence of this was easily found at the rally in Cork when some men attending the far-right rally were leaving. As they did so they came close to the counter protestors, with one of the men angrily shouting “There’s not a testicle between the lot of ye”. Although this pales in comparison to what has been said and done elsewhere, it’s indicative of the pattern of hate which underlies other far-right protests that have taken place around the country.

Then there’s the involvement of the far right from outside of Ireland in supporting extremism here. In a second video uploaded to YouTube by the same man who was discussing “Cultural Marxist” infiltration, he could be heard telling a fellow protester that

We’ve got a lot of people in America coming on board helping us now as well.

In the same video, during an apparent attempt to recruit the protestor he’s talking to, the man identifies himself as a member of the National Party.

Free speech for these people is nothing but a cover. They want to be able to attack others with no consequences. But words have power. And words lead to actions. When that happens it’s minorities and activists who pay the price. The far right understands this. In, fact it counts on it because otherwise there would be people left to challenge the hatred it promotes.

The far right cannot be allowed to continue to abuse the idea of free speech. We’ve seen the consequences of it in the past. And we know very well what will happen if extremist ideas are allowed to go unchecked here in Ireland. A lot is at stake. And that means being vigilant because some who would claim their right to free speech in one hand hold a dagger aimed at the heart of minorities in the other.

Featured image via The Beacon

iThere are no comments

Begin typing your search above and press return to search. Press Esc to cancel.